This guide offers instruction on the installation and use of Open Cache Acceleration Software for Linux (Open CAS Linux). It will be helpful for the end user to have a basic knowledge of storage management and Linux* system administration.

Open CAS Linux installs into the Linux operating system as a kernel module. The nature of the integration provides a cache solution that is transparent to users, applications and your existing storage infrastructure. No storage migration or application changes are required.

As shown in the figure below, initial read data is retrieved from backend storage and copied to the Open CAS Linux cache. A second read promotes data to system memory. Subsequent reads are returned at high-performance RAM or flash speed. In Write-through mode, all data is written synchronously to both the backend storage and the cache. In Write-back mode, all data is written to the cache then eventually flushed to the backend storage. When the cache is full, newly identified active data evicts stale data from the cache, utilizing the Open CAS Linux proprietary eviction algorithm. 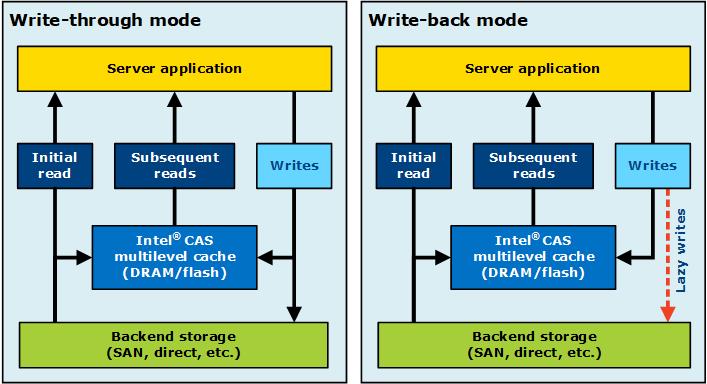 Open CAS Linux, by default, employs a block-based caching architecture that caches all of the activity on the selected core device.

The following conventions are used in this manual:

Refer to the resources and tools listed in the following table for assistance with Open CAS Linux testing and operations, or to learn more about caching and application IO performance management.