In general a cache (1) is a component that mediates data exchange between an application and a backend storage (2), selectively storing most accessed data on a relatively smaller and faster cache storage (3). Every time the cached data is accessed by the application, an I/O operation is performed on the cache storage, decreasing data access time and improving performance of the whole system. 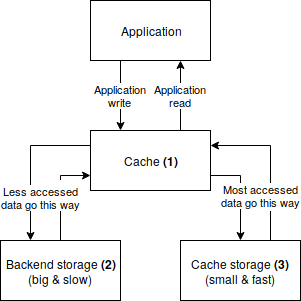 If an application performs an I/O operation, the cache checks if core lines being accessed are already mapped to cache lines in the cache. If they’re not, then we deal with a cache miss. In such situation the cache engine has to access data on the backend storage, which is slower than accessing data on the cache storage. After that, depending on current cache mode cache engine may decide to map the core line into cache, and thus perfom a cache insert operation.

On the other hand, if the accessed core line is mapped into cache, then we have a cache hit. It’s the optimistic scenario, in which we are able to serve data to the application directly from the cache storage.

In OCF a cache object provides an interface for interacting with the cache state machine. Its API allows for attaching cache storage, adding and removing cores, modifying various configuration parameters and getting statistics. Every cache operates on a single cache storage (represented by the cache volume) where it stores data and metadata.

Single cache can handle data from many cores. It’s called a multi-core configuration. The core object can become backend storage of another core or cache storage of some cache, which makes it possible to construct complex multilevel configurations.